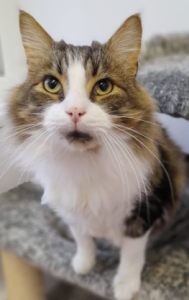 Jinxy arrived at the Rescue as his owners could no longer care for him.

Jinxy is a gentle giant but under that fluff he is big! He loves a fuss and a cuddle. We think he has a little bit of Maine Coon in him as he is so big. He is very affectionate once he knows you and loves attention.

He has been at the Rescue for a few months now and while he has been with us, he has suffered with a few dental issues. he has had to undergo a number of dentals to try and help him, but his new owners need to be aware that this issue may be on going. He has been fine in himself and loves his food but may need further medication, which we can discuss with you.

Jinxy would prefer a home where he was the only pet and would be better suited to live with sensible older children.