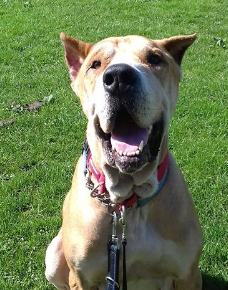 On a cold and frosty morning in November 2016, a local member of the public was walking his dog, when he came across a dog dying a few streets behind the Rescue. Without hesitation, our manager followed the man and found a starved, malnourished, fur-less shell of a dog slumped on the pavement. ‘King’ Kenny, as he is now known, had to be lifted into the back of the Rescue’s van, as he was so weak and unable to stand. He was rushed to our vets and the head vet commented that it was the worse case of neglect he had seen in his thirty year career. Kenny had been starved, his ears cropped (which would of been without anaesthetic), he had entropian of the eye lids that had been left to cause irritation and infect the eyes and he had a severe case of sarcoptic mange.  Sarcoptic manage is a contagious skin disease, which had been left untreated, and resulted in almost complete loss of body fur, sore open wounds and scabs all over his body. The staff began weeks of intense care to get Kenny back to health. Kenny formed a strong bond with the small team of staff and volunteers that were helping to nurse him back to health and these people are his family today.

Kenny endured operations on his eyes to correct his inverted eyelashes, was castrated, vaccinated and his manage treated.  However, as a result of extensive neglect at such a young age, Kenny was left with severe allergies to food, storage mites and grass, to name but a few.

During his recovery, Kenny’s story gained him an army of fans from all over the world, who followed his progression every step of the way and continue to do so, even to this day. Pennine Pen supporters kindly donated money towards the cost of his veterinary bills and we will always be eternally grateful for their help.  Kenny is now a majestic, beautiful boy and his home will remain at Pennine Pen.

You can help to cover the cost of caring for Kenny by either setting up a regular standing order, or making a one of donation, via BT My Donate.