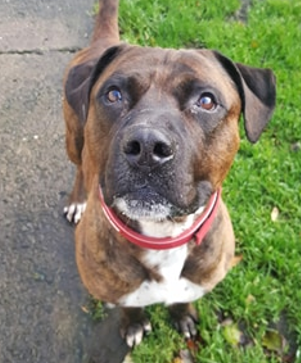 Tyson arrived at the Rescue as his owner could no longer care for him. Tyson is a big boy and weighs 32kg at the moment. However, he does need to gain a bit of weight, so is going to become heavier and will need an owner who is going to be able to handle him as he is very strong.

Tyson is toilet trained. He enjoys his walks and will therefore need an active home. He is not suitable to be an off-lead dog, as he has no recall whatsoever and is very ignorant if he gets a scent he wants to sniff.

Tyson loves his toys and a game of fetch. He will drop the ball straight away in exchange for another to be thrown.

Tyson has not mixed much with other dogs, so gets excited and is unsure when he sees them out on walks. He has not been vocal or reactive, but does cry and seem very interested, so he will need some work to learn to focus on his handler and not other dogs. We have done some dog testing with him, which went well and he has also met dogs on his walks and greeted them well. We would consider rehoming him with a similar sized neutered female with successful introductions.

Tyson is giddy when travelling and would need to be secured in the car. Due to his size and being unsure of his past, we will not rehome Tyson with young children. Tyson really loves people and being around his family. He is a big loveable boy who needs some consistency and love.

If you think you can give Tyson the forever home he deserves, please get in touch.