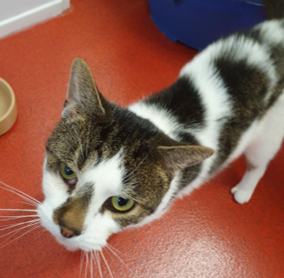 Pasha arrived at the Rescue as his owner could no longer care for him. Pasha has had to undergo a dental, as he was unable to eat properly, due to his mouth being badly infected. He also requires an operation on his eye, to fix a cherry eye, which is due to be undertaken shortly. Pasha is a gentle cat who enjoys a fuss, but as he has had to have a lot of daily medication since he arrived in our care, he tends to shy away in his bed most of the time.

Pasha would like a quiet home, with no young children, but he has lived with a female cat before so could possibly be rehomed with an existing cat. Once Pasha has had his eye operation, he should hopefully need no long term veterinary treatment.