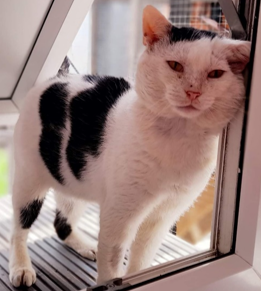 Buster is a special boy who is looking for a special home. He has become a bit of a legend in our cattery, such a big character who follows you around pretending he has not been fed, when in fact he has had multiple meals already!

Buster came off the streets in a terrible condition. His beautiful white coat was thick with dirt and he smelt badly because he had given up trying to cleaning himself.

Buster was also covered in old battle wounds and because he was out on the streets and not neutered, he was fighting with other unneutered males and contracted feline AIDS, also known as FIV, meaning Buster’s immune system is weaker than a normal cats.

After such a hard time, this boy deserves the best home ever. He now loves his home comforts and if he is not snoozing in a hammock, he is wanting a tasty meal or a fuss.

It has taken weeks, but he is finally starting to look clean again and is now ready for his new home.
Buster would not be suitable to live with young children.
Buster is calm around other cats and could possibly live with another FIV feline friend.